Is cacao good for your health ?

Chocolate is very much appreciated by food lovers. Product of pleasure, it is often considered bad for our health, especially accused of getting us fat. But what if, on the contrary, chocolate was good for our health? Here we give you the 7 reasons why you should eat more dark chocolate!

1 - Beta-endorphins: an arm in the battle against depression

Who among us has never had the experience of chomping down on a piece of chocolate when feeling depressed? The urge to do this is linked to the presence of beta-endorphins in cocoa. The more of it we eat, the more the concentration of beta-endorphins in the blood increases and the more the sensation of pleasure increases, chasing dark thoughts away. Chocolate also contains other substances that act in the same way: euphoria inducing anandamide, stress-reducing serotonin, and phenethylamine, a bona fide antidepressant. And finally, there are also various minerals that help to reduce muscular tension present in chocolate: magnesium, iron, potassium and phosphorus.

Chocolate has certain virtues to offer when it comes to the fight against cardiovascular type diseases, as demonstrated by a 2012 Australian study published in the BMJ (British Medical Journal). Daily consumption of chocolate serves as a complementary alternative to conventional medical treatments for those individuals at risk. Thanks to the polyphenols it contains – powerful natural antioxydants – chocolate has the effect of increasing the anti-oxidizing capacity of blood plasma. This helps to limit the oxidation of low-density lipoprotein (LDL), which is the process that leads to arteriosclerosis (hardening of the arteries). And finally, eating a few squares of dark chocolate each week helps to reduce arterial blood pressure and prevent the formation of blood clots.

3 - Shiny hair and strong nails: the benefits of sulfur

Thanks to the sulfur it contains, cocoa makes hair shiny and nails strong and durable. Why is this? Because sulfur has the ability to rebuild keratin and collagen, substances that are essential for healthy hair, nails and skin. In particular, the sulfur particles transport nutrients from one cell to another, enabling blood sugar regulation and tissue repair, and strengthening the immune system. In doing this, they also have the effect of increasing the vitality of various organs, including the liver and pancreas.

Cocoa contains vitamin E, which happens to be an antioxidant that helps to slow down skin aging. A 2006 study carried out by the Düsseldorf Institute of Molecular Biochemistry demonstrated that the flavonoids contained in chocolate facilitate blood circulation. And flavonoids also have many other properties: they improve tissue density and hydration, make nails stronger and more durable, and protect against the damage attributed to ultraviolet rays. Antioxidants help the body to rid itself of free radicals, which are responsible for causing damage to cells and bringing about signs of aging.

When it comes to combating stress and anxiety, cocoa has much to recommend it due to fact it contains magnesium. This mineral element plays a key role in preventing the negative impacts of stress. Additionally, It also reduces blood plasma cortisol levels. A diet rich in magnesium, therefore, prevents the appearance of certain stress-related symptoms, such as chronic fatigue, the sensation of feeling exhausted, and a reduced ability to tolerate physical effort without becoming tired. Chocolate is synonymous with a regain in the self confidence you need to face the challenges of everyday living.

6 - Protection against tooth decay: hooray for the tannin in cocoa!

We need to first dispense with a received notion here: unlike most sweets and confectionery, chocolate does not cause an increase in tooth decay! In fact, just the opposite is true: it has a tendency to reduce this risk due to the presence of theobromine. This particular component of chocolate helps to increase the hardness of dental enamel. By increasing the hardness of the enamel, chocolate protects teeth against an imbalance in the bacterial flora present in the plaque found on their surface. Furthermore, cocoa also contains tannin, which halts the development of microbes and reduces the formation of dental plaque. It should also be noted that cocoa contains fluorine – famously associated with toothpastes – and phosphates, which attack the acids produced by sugars.

7 - Energy boosting: the winning combination of theobromine and caffeine

Good news for everyone who wants to boost their daily energy levels: cocoa combats the effects of fatigue! How? Due to the high fat and sugar content found in chocolate, or energy in other words. Chocolate actually contains between 450 and 500 calories per 100 g on average. When you consume chocolate, you also get the benefits of theobromine and caffeine, both of which are stimulants. These have the effect of increasing adrenaline secretion and energizing the whole organism, making you more active and alert. 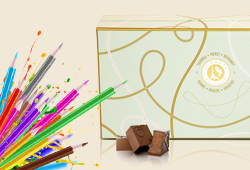 End of the school year, which gift to offer to teachers?

Only a few days away from the end of the school year, we have been thinking about the best gift idea and best way to thank our children’s teachers (and of course, nannies and classroom...

Delivery for free within 24h to Belgium, France, the UK, the Netherlands, Germany, Luxembourg, Denmark and Monaco. Check here for more destinations.